We were hired to streamline data gathering and visualisation for this System Operations center. The company provide electricity services in a volatile weather area, over hundreds of miles of central Oklahoma. Hundreds of SCADA data inputs on lines, reclosers and substations needed to be normalized and visualized to a room of engineers. We re-designed the 6-screen dashboard and a companion desktop application for deeper dives.

As lead UX, I handled the user research, layout and design phases for this project. We worked with the client on their property several times, learning about electrical grid reporting, engineer workflows and business needs. 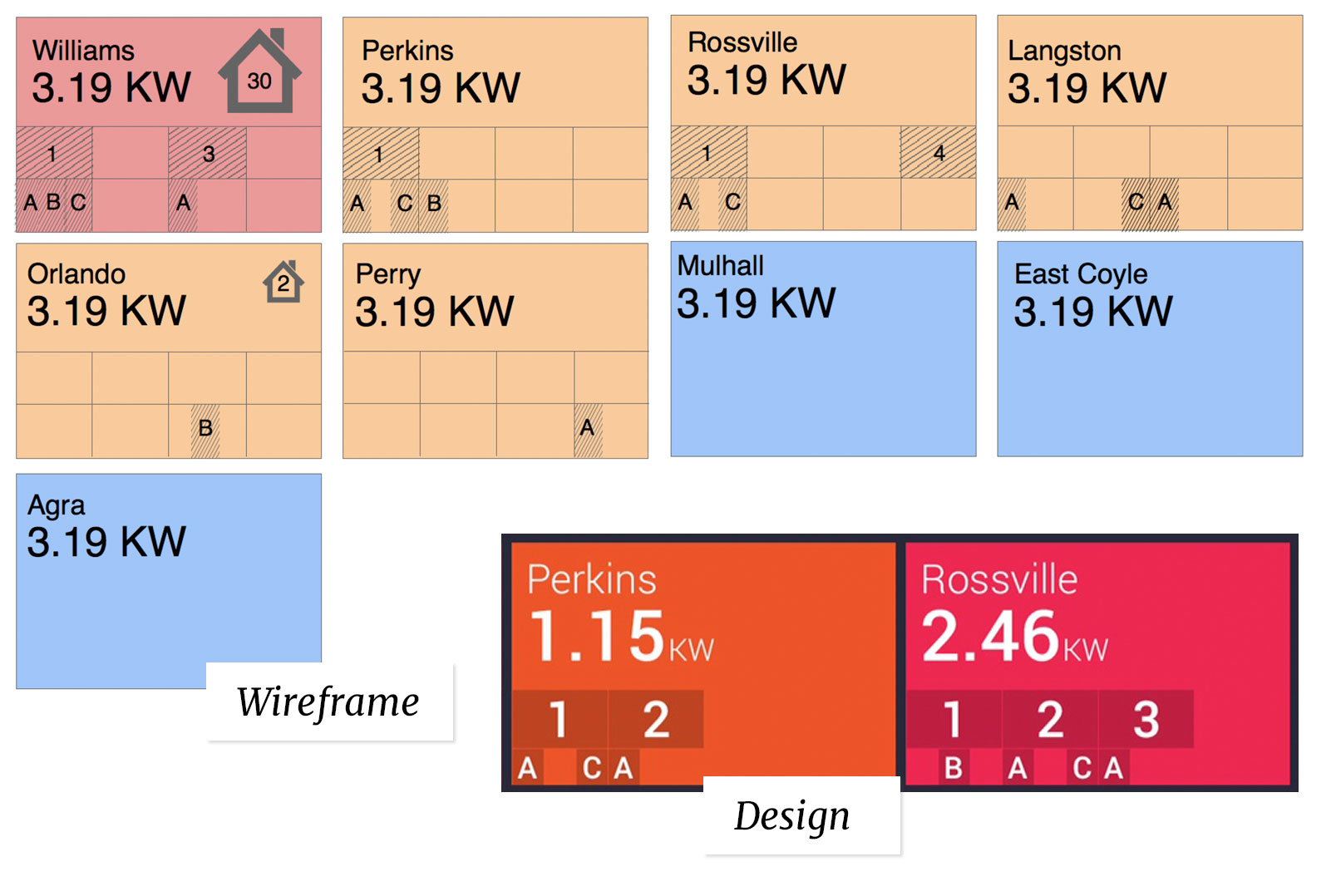 Two of the six screens are used to show the the substation overview. There are 20 substations and room for 24 total. Each substation has 3-4 sub-feeders and each of those feeders has 3 phases. Each phase reports in several KPIs including watts, amps and volts. We tried a few ways to show off all this data, but the numbers were cluttered and impossible to read from a distance.

With the user in front of mind, I realized they did not need to see all 100+ readouts for each substation, but only the ones that were abnormal. We were building an alert system already, so could utilize those thresholds to surface readings that were abnormal. This way, a substation running within healthy limits could essentially be ignored by engineers unless they chose to drill into it in the web app. Substations with abnormal numbers ‘light’ up in the space where the error occurs. I designed a tree-view for the hierarchy and re-used it across the system for consistency. 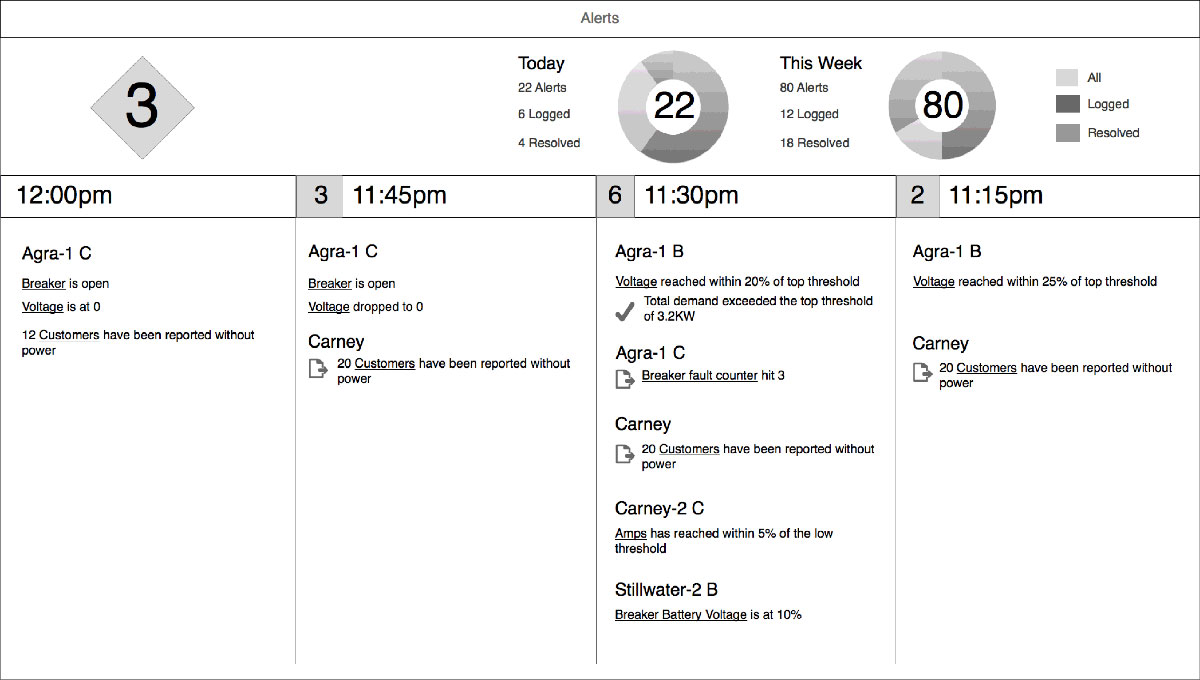 To manage the huge amount of data coming in from all over the system, we designed an alert system that allowed engineers to set a threshold for readings. Each threshold could be set as a parent (children inherit) or individually as a child. As well as receiving alerts as notifications in their desktop application, we needed a way for anyone in the SOC to view outages and issues.

One hour to Resolve

The challenge was to show the alerts and show that they were being resolved. I designed a blown-out timeline of 4 columns, each representing 15 mins. A new alert shows up in column 1, the most recent. If it was resolved quickly, it would disappear. If not, it would continue to display in a new column every 15 minutes until it was visible 4 times. This solution gave staff a 60 minute view of the system, while reducing ETL refresh times to large chunks.

I worked closely with our graphic designer to create designs that would work both for the content and for the environment. For the UI, we had to reserve some colors for open and closed circuits and refrained from using shapes that are common in electrical diagrams. The color scheme used to show quantitive data excluded green (closed circuit) and red (open circuit). We used an orange spectrum to show megawatt levels.

Because the SOC room is large, and naturally lit, we decided on a black background for visibility reasons. 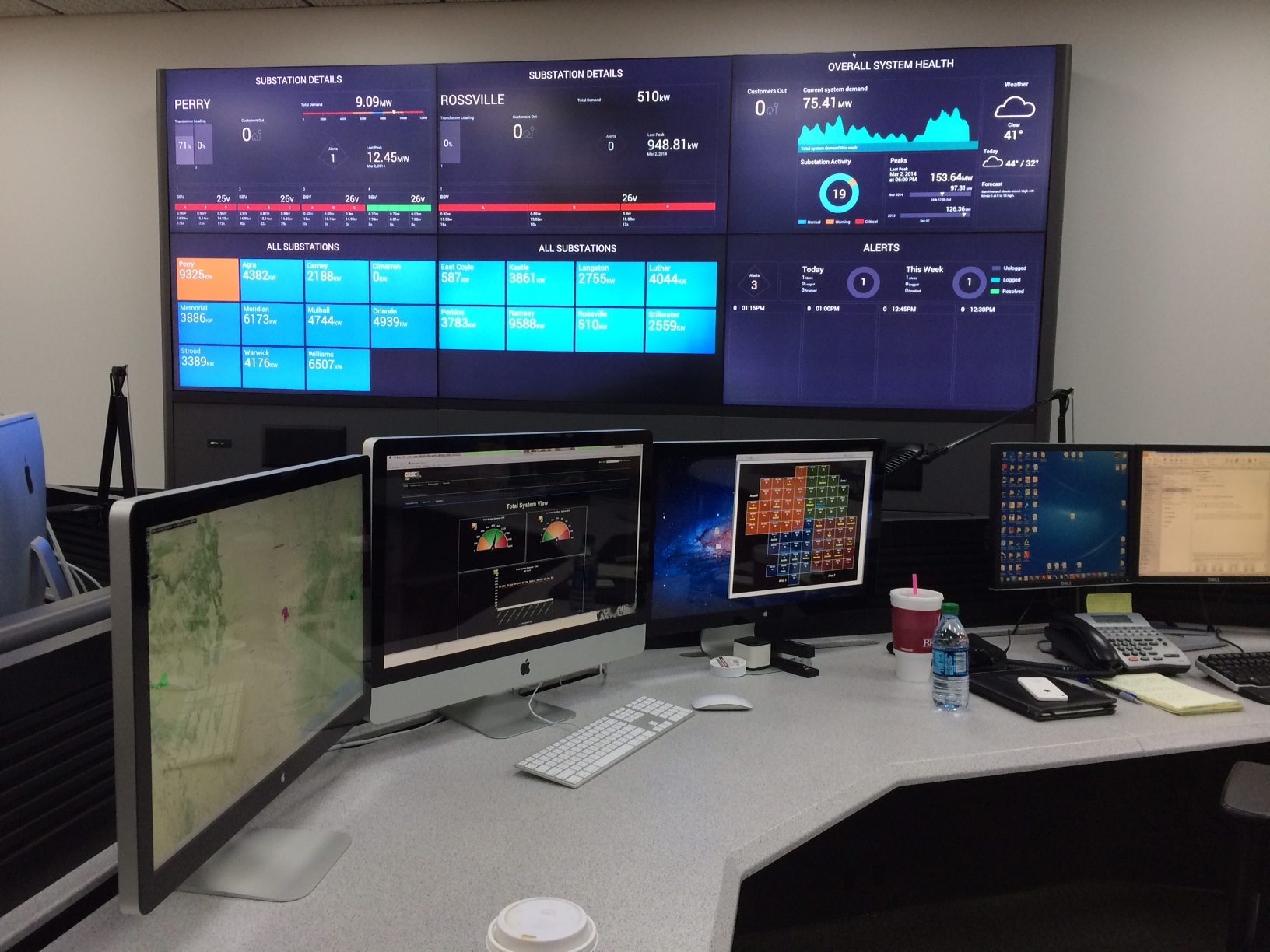